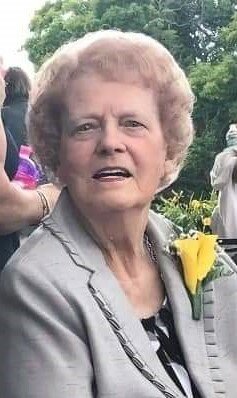 Evelyn Carol Kabitzke Seier (nee Bethe) "Miss Evie", as her beloved Ray called her, the matriarch of our family, passed peacefully surrounded by those she loved on Saturday, August 20, 2022, at home of congestive heart failure. She was 98 years young and cognizant to the very end. Although physically weak, her mind was as sharp as a tack.

Evelyn was born in St. Louis, MO on February 9. 1924 to William and Beulah (Tiffany) Bethe. She was a Waukesha resident for most of her life, moving here as a small child.

Evelyn and her husband Ray, whom she married on October 19, 1969, owned the Blue Lantern Tavern from 1972-1979, and then the Wisconsin House from 1979-1991. She was a member of the Tavern League, VFW Post 721(as one of the oldest members) and bowled in various leagues in her younger years. She loved playing cards, doing puzzles and was very lucky at gambling. She enjoyed watching the Brewers, Packers and the PGA on TV She and Ray also loved to travel. One of her claims to fame will have to be her participation in a medical study through St. Luke’s Hospital in which, at age 90, she had experimental surgery on her mitral valve and follow-up surgery at age 95 which gave her eight more precious years that her family could enjoy with her.

Evelyn was preceded in death by her husband Raymond in 2001 as well as her siblings Lorraine and Bill. Evelyn had a large extended family who will greatly miss her presence and influence. She is survived by four children: Sharon Otto of New Berlin, Judie (George) Farrell of Janesville, Bob (Debbie) Kabitzke of Waukesha, Gary Kabitzke of Grafton and two stepdaughters, Lynn (Charles) Jones of Texas, and Peggy Kirkland of Arizona. Additional survivors include niece Diane Brugler, who Evelyn considered as another daughter, Goddaughter Sandi Tiffany Chaussee and cousin Ron McGowen as well as her grandchildren: Kim, Lori, Marc, Amy, Jeff, Lisa, Kara, Matt, Rachel, Jesten, Emily, and Libby; step-grandchildren: John, Alex, Kelsey Michael, Grant, and Jake.  She had a total of 24 great-grandchildren with number 25 due in February, 9 step-great grandchildren and 10 great-great grandchildren. In addition, Ray’s sister-in-law Judy of Columbus, WI and nieces and nephews from the Seier and Kabitzke families.

The visitation for Evelyn will be held on Friday September 2, 2022, from 4:00pm until the start of services at 6:00pm at Cesarz Charapata & Zinnecker Funeral Home 237 N Moreland Blvd Waukesha, WI 53188.

We gratefully thank the staff at St. Luke’s Hospital, Village Primary Care, Heartland Hospice, her neighbors Phil and Claudia Barron, and her caregiver Janet Dudzek who made it possible to fulfill “Miss Evie’s” wish to remain at home until the very end.

In lieu of flowers you may donate to the VFW, Heartland Hospice or a charity of your choice.

“To Know Her is to Love Her”

To send flowers to the family or plant a tree in memory of Evelyn Kabitzke- Seier, please visit Tribute Store
Friday
2
September

Share Your Memory of
Evelyn
Upload Your Memory View All Memories
Be the first to upload a memory!
Share A Memory
Send Flowers