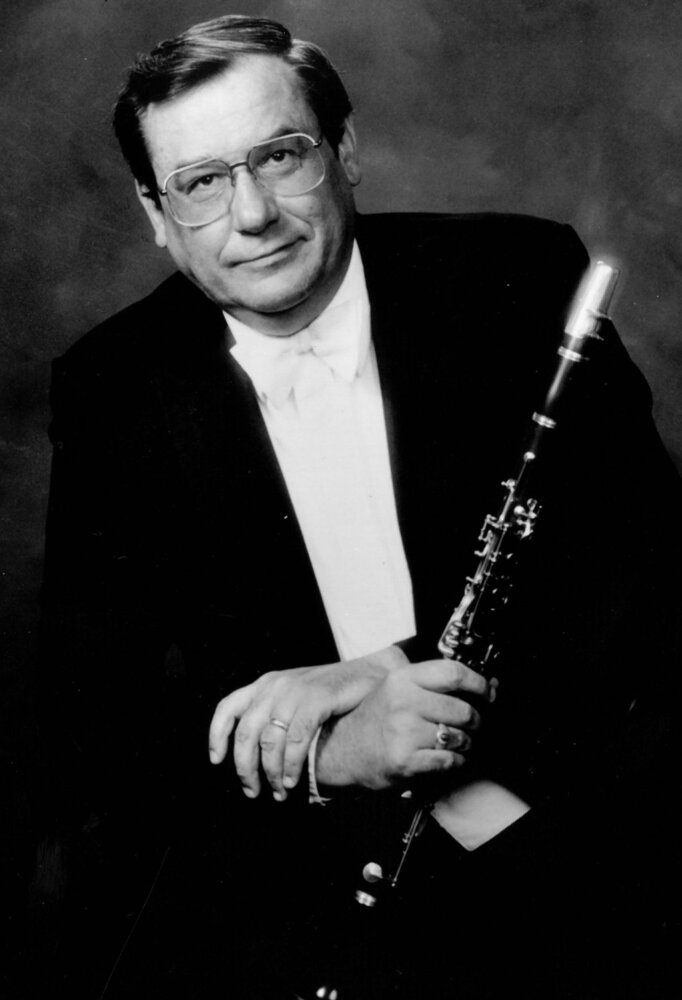 Russell Dagon, 83 of Waukesha passed away early in the morning on Wednesday, October 20, 2021, after a two-year long battle with Alzheimer’s Disease. Russ was born in Joliet IL on March 17, 1938: St. Patrick’s Day. His wife of 59 years, Sandy, his children Kelly Thompson (Mike) of Libertyville IL, Rusty (Jane) of Orlando FL, Jeff of Wauwatosa WI, and grandchildren; Patrick, Kevin, and Annie Thompson and Russell IV and Riley Dagon, his nephew Dave Swanson (Ellen) will all miss him dearly. Beyond his family, Russ’s legacy is musicians all over the world who studied with him during his almost 25 years on the faculty at Northwestern University’s Bienen School of Music, the University of Wisconsin, and Carroll University to name but a few of the places he taught. When the school year ended, Russ typically taught over the summer, including time with the National Youth Orchestra of Canada, Birch Creek Music Center in Door County WI and Batawagama Band Camp in the UP of MI. Russ worked tirelessly to help his students achieve success and saw many of them go on to professional music careers.

Russ’s career always ran on parallel tracks; teaching and performing. After graduating from Northwestern University in 1962 with his master’s degree, he and Sandy married. From Evanston, Russ and Sandy moved to Bemidji MN where he held his first teaching post at Bemidji State University. From Minnesota, Russ continued his post-graduate work at the Eastman School of Music, until he was selected as the second clarinetist for the Buffalo Philharmonic. In 1969, Russ and Sandy moved to Waukesha; at that time, Russ was selected as the principal clarinetist for the Milwaukee Symphony, a chair he occupied until 1999. During that time, he traveled the world playing with the orchestra, recorded with them, and accompanied some of the world’s greatest artists, all the while teaching master classes and frequently serving as a guest lecturer. His symphony colleagues will attest to his towering talent, but more importantly his towering friendship. Russ had a good word for everyone who would stop and talk with him: a symphony-goer, a colleague, a student, a friend. Russ was a great musician and a better human.

While teaching and performing kept him on the road and working evenings, weekends, and holidays, he was dedicated to his family, and could regularly be seen in the audience of grade school band concerts, soccer games, football games, swim meets, and crew regattas. His grandchildren adored him and loved to spend any time they could at Grandma and Grandpa’s house in Waukesha.

After retirement, Russ and Sandy spent most of their summers and falls in Door County. Russ liked nothing more than to enjoy his evening cocktail while watching the sunset over Green Bay. In Door County he regularly visited with his friends, family, and colleagues.

Russ is preceded in death by his father Russell Sr, his mother Jane, his sister Joan and Joan’s husband, Otto, and his in-laws, George and Rosanna Schubert.

A memorial Service for Russ Dagon will be held at 10:00 AM (visitation) with the service at 11:30 AM on Saturday, November 6, 2021 at Southminister Presbyterian Church in Waukesha (200 Richard St. Waukesha, WI 53189) where Russ and Sandy were long-time members. In lieu of flowers, the family requests that you consider a donation to Southminster Presbyterian Church of Waukesha or the Milwaukee Symphony Orchestra.

To send flowers to the family or plant a tree in memory of Russell Dagon Jr., please visit Tribute Store
Saturday
6
November

Share Your Memory of
Russell
Upload Your Memory View All Memories
Be the first to upload a memory!
Share A Memory
Send Flowers