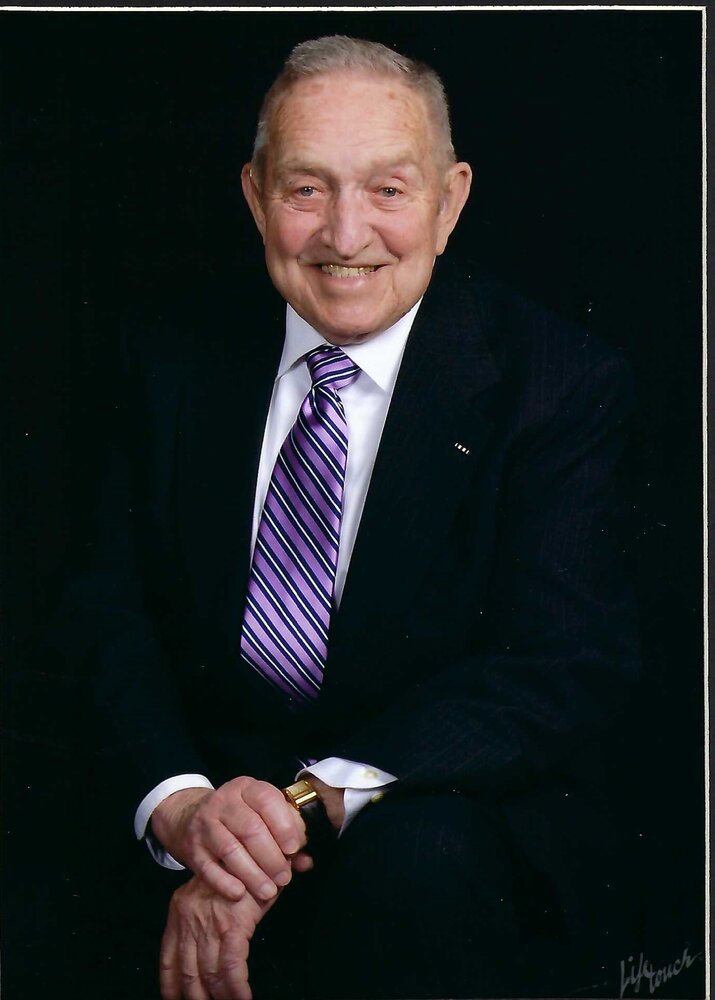 Mike Weigl was born on June 16, 1923, in Milwaukee, Wisconsin to immigrant parents Mike Weigl from Munich Germany and Clara Weigl (nee Hagler) from Basel Switzerland and passed away peacefully September 25, 2021.  Young Mike only spoke German at home and learned to speak English when he went to kindergarten.  He had one older sister, Clara, and growing up in the Great Depression, helped the family by taking a paper route when he was age 12 and continued this until he was 18.  Upon graduating from Boys Technical High School in Milwaukee, Wisconsin, he got a job at A.O. Smith in 1941.

In March of 1943 Mike enlisted in the U.S. Army where he was trained in engineering at Stanford University in Palo Alto, California.  He was assigned to the 71st Infantry Division and promoted to Sargeant and served in the 271st Combat Engineering Battalion.  He disembarked in Northern France and was attached to the Third Army under General George Patton as they captured cities and towns while they drove through Germany, Czechoslovakia and met the Russians in Steyer, Austria.  While getting ready to cross the Inn River he and Sargeant Weber (while under intense small arms fire) rendered one thousand six hundred pounds of explosives, and (2) one-thousand-pound bombs useless by cutting the wires and cables the enemy had planted on the face of the dam. This allowed the troops to use the Dam as a bridge to cross into Austria. For this act of bravery Mike was awarded the Silver Star for gallantry in action, courage, and heroic achievement.

While on leave from the Army, he met his future bride, Doris Waite at a dance at the Eagles Club.  Upon being discharged, Mike and Doris were engaged, and married in September of 1946.  They had five sons, Earl, Steve, Mike, Joe and Jeff.

Mike worked at A.O. Smith, first as a Tool & Die Maker, and then as a Senior Tool Designer until retiring in 1980.  He continued using his skills as a draftsman, first teaching others at Waukesha Tech, and then teaching himself computer aided design and contracting at several firms, working through his early 80s.

Mike was involved in the Veterans of Foreign Wars (VFW) and American Legion and was always proud to be an American and of his service to his country.  He was also involved in his sons’ activities, especially as a leader in multiple Boy Scout troops.

Mike was a loyal sports fan, always cheering for the Packers, first the Braves then Brewers, and the Bucks.

Mike was a devoted husband, and wonderful father to his five sons and their wives, Nancy, Kathy, Julie and Debbie Weigl, and a loving and doting grandfather and great grandfather.  After Doris died in 2011, Mike fell in love again and had a commitment ceremony with Ruby Kulk in 2017.  This gave Mike a daughter, Sally Bergman.

Mike is preceded in death by his parents, sister Clara, wife Doris, son Steve, grandson James and partner Ruby.  Mike was a wonderful and kind man who loved all and truly lived the saying that if you can’t say something nice about someone, then don’t say anything at all.  Mike was a loving soul who will be missed by all who knew him.

To send flowers to the family or plant a tree in memory of Michael Weigl, please visit Tribute Store
Wednesday
6
October