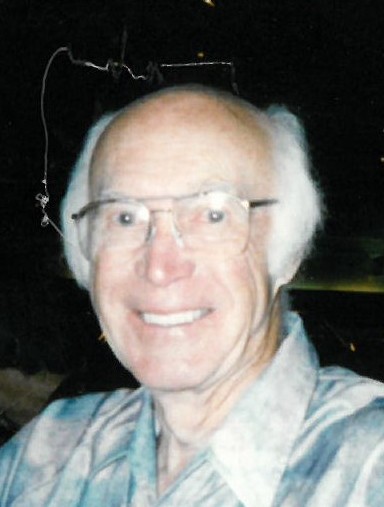 Arnold E Fiedler, of Dousman, Wisconsin formerly of Sun City West, Arizona and Minot, North Dakota passed away after a courageous fight with cancer at the age of 99 years and 8 months.  He is survived by his wife, Erdina K Fiedler, who shared 75 years of marriage with him. Arnold was born on November 13, 1921 on a farm near Butte, ND.  At the age of 20, he joined the Navy to fight in World War II.  He survived a kamikaze attack aboard the USS Mullany in the South Pacific. He was then one of the first to go back on board and secure his ship.  Upon returning to ND, he found the love of his life waiting for him.  He and Erdina K Rust were married on March 5th, 1946.  The same year that President Trump was born.  He completed his GED and then graduated with a Business degree from Minot State University.  At that time, he went to work as a loan officer at First National Bank which is now known as Wells Fargo.

He and Erdina were faithful attendees of Immanuel Baptist Church. He retired at the young age of 62 and pursued a second career in Sun City West, AZ as a realtor. Throughout the years, he volunteered and led many different organizations including the American Legion, Toastmasters International, Kiwanis, the Model A Club, and the National Association of Realtors. In 2005, Arnold retired back to a “farm” in Dousman, WI.  He spent the rest of his years renovating the barn, the hay shed, his grandkids’ homes, and various other projects that benefitted and enriched all those who loved him. His tenacity and generosity in life is attested to by his family, friends, and all who knew him.

Arnold is survived by wife, Erdina, and one son, J Bernard Fiedler and his wife, Margaret (Olson), and three grandchildren, Meagan (Tom) Gulak, Jon (Anjie) Fiedler, Breanna (Todd) Parker, 9 great-grandchildren, and 28 nieces and nephews. He was preceded in death by his mother, father, and brothers, Daniel, Otto, Edwin, Minhardt, Herbert, and his sisters, Ida and Marie.

To send flowers to the family or plant a tree in memory of Arnold Fiedler, please visit Tribute Store
Monday
16
August

Share Your Memory of
Arnold
Upload Your Memory View All Memories
Be the first to upload a memory!
Share A Memory
Send Flowers