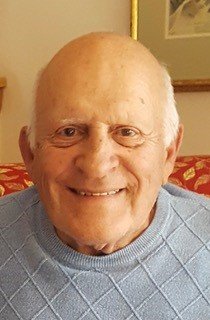 Gennaro “Gene” Marrazzo passed away on January 5, 2021,  from congestive heart failure.  He was preceded in death by his wife, Darlene (nee Paulson), of 58 years, whom he called “the best thing that ever happened to him.” His children find comfort in the belief that Gene and Darlene are together again for eternity. Gene will be forever in the hearts of his four children: Jean Ann Marrazzo-Powers (Bill), Marcia Hempel (Bill), Julie and David Marrazzo. In addition, Gene had 2 grandchildren: Scott Hempel and Sam Marrazzo and 3 great grandchildren: Kieran, Lanah, and Landon Hempel.

Gene was born on June 16,1932, to Emilio and Catherine (nee Lento)  Marrazzo and was the oldest of 3 children. He graduated from Kenosha Bradford High School in 1950. Gene attended Spencerian College and became a court reporter. It was in this role that a mutual friend introduced him to Darlene while she was working as a social worker in Kenosha.

Gene and Darlene were married in January of 1959 and soon moved to Waukesha so that Gene could become a court reporter at the Waukesha County Courthouse which is where he worked for 30 years. Gene and Darlene built a life and family in Waukesha. Family was always a priority to Gene and his loyalty was unwavering.

Music was a passion and a gift of Gene’s. When in high school, Gene played the clarinet in a small band with friends. He then enlisted in the Army and served in the 5th Army Band from 1952-1955 at Fort Sheridan, playing concerts and marching in parades attempting to “keep the spirits up” during the Korean War. While he worked and even in retirement, he continued to play his clarinet in the American Legion Band, the Waukesha Park Board Band and for a while joined the UW-Waukesha band.

Gene’s quiet presence and humble nature will be missed by all who knew him. This includes his sister, Rita, and her family as well as other relatives in the Kenosha and Madison areas.

On behalf of Gene, the  family is grateful for the compassionate caregivers from Home Helpers of Lake Country who, along with Gene’s children, cared for him daily and were able to fulfill his desire to remain in his home until his final day.

The Marrazzos will plan a  gathering to honor Gene’s life and legacy at a future time, but have no immediate plans.  If desired, memorials appreciated to the City of Waukesha Civic Band Fund (1900 Aviation Dr. Waukesha, WI 53188). Donations will support future concerts.

Cesarz, Charapata & Zinnecker Funeral Home, Cremation and Pre-Planning Services are serving the family.  For further information, please call 262‑542‑6609, or for directions, an online obituary, or to leave a condolence, please visit www.WaukeshasFuneralHome.com.

To send flowers to the family or plant a tree in memory of Gennaro Marrazzo, please visit Tribute Store

The Marrazzos will plan a  gathering to honor Gene’s life and legacy at a future time, but have no immediate plans.  If desired, memorials appreciated to the City of Waukesha Civic Band Fund (1900 Aviation Dr. Waukesha, WI 53188). Donations will support future concerts.

Share Your Memory of
Gennaro
Upload Your Memory View All Memories
Be the first to upload a memory!
Share A Memory
Send Flowers