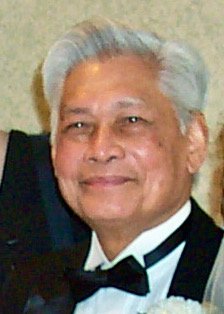 The story of his amazing life began in 1924, in Laoag, Ilocos Norte, Philippines, the youngest of nine children born to Miguel and Vicenta. As a child, and indeed for all of his life, he was a prankster and a joker, whose hapless subjects were often the guests who stayed at his family’s boarding house. He was an essentially self-taught and voracious reader, locking himself in his room as a retreat from his bossy siblings, and climbing high up in the sunny branches of his family’s backyard tree reading book after book while munching away on the tree’s fruit. He read Tom Sawyer, which added to his repertoire of pranks, but his reading also equipped him with a wide vocabulary, keen intellect, and a tireless and razor sharp mind for his entire life.

His 17th birthday was the day that lived in infamy: the bombing of Pearl Harbor during World War II, during which the Philippines was invaded by Imperial Japan. War was hell, and anarchy, starvation, and death engulfed the Philippines. But like many of his generation, the Greatest Generation, he answered the call to fight for good and for freedom. When he was just 18 years old, he became a spy with the Allied Intelligence Bureau, risking his life and utilizing his intellect as a weapon to learn the language and ways of the enemy. During one particularly dangerous three-day mission, he secretly smuggled maps of Japanese positions to the forces commanded by U.S. Gen. Douglas MacArthur, who then used that vital intelligence to free thousands of captives being held by the Japanese at the University of Santo Tomas in Manila. For his service and valor, Louis was awarded the Congressional Gold Medal.

After achieving victory at war, he resumed his education, graduating one semester early from the University of Santo Tomas, and with a Master’s degree from Adamson University completed in just one year. Then Louis met Amy, and three years later they were married on April 26, 1952. Their prayers were continually answered when God gifted them with two daughters and five sons born from 1953 to 1964. Meanwhile, Louis was a successful chemist and business executive specializing in rubber production.

However, despite their very comfortable life in the Philippines, Louis and Amy had the vision and the guts to immigrate to the United States, determined to provide their children a better life: one of peace and greater opportunity, and free from war and the communist incursions in the Philippines at that time.

Louis then worked for several more years and lived with his family first in northeast Ohio, Akron/Uniontown area, but eventually settling in Waukesha, Wisconsin, where he retired in 1986. Louis and Amy shared a solemn pride in overcoming the very real challenges of adapting to American culture as immigrants, while raising all seven of their children to be college graduates and thriving professionals.

Louis was so much fun to be around, he had the best sense of humor, and he enjoyed life in the United States and in retirement: ballroom dancing and going to the movies with Amy; playing mahjong, chess, and card games with family and friends from FAAWIS; taking road trips throughout the country and traveling around the world including two Balikbayan trips; dining at his favorite Filipino, Chinese, and seafood restaurants; and playing with and cooking food for his grandchildren, who he helped raise and who idolized him.

He was an avid gardener, who would hit rabbits eating his vegetables with rocks fired from his slingshot. He relished the mental exercises of crossword puzzles, Reader’s Digest and National Geographic magazines, and his favorite TV game shows, Wheel of Fortune and Jeopardy. He was instantly recognizable to his family and friends with his enviable full head of black, and later platinum hair with his trademark part, always looking so handsome and regal.

Louis practiced and was profoundly devoted to his Catholic faith, which was central to his life. His many works of Christian charity included his leadership of the Legion of Mary, membership in The Cursillo Movement and Couples for Christ, and volunteer work with the St. Vincent de Paul Society. And he was a longtime parishioner and Eucharistic minister at St. William Church of Waukesha, at which he would attend early morning daily mass to receive Holy Communion, which he called his spiritual food.

Grateful for the abundant blessings God bestowed upon him, so deeply loved by his ever-growing family, and cherished by his many friends and neighbors, Louis painlessly and peacefully returned to the Lord on the night of November 14, 2020, at his home in Pewaukee, but only after finishing a delicious dinner with the love of his life Amy nearby.

With Faith, Hope, and Love, we all grieve his passing, but we already look forward to that one sweet day when we will be reunited with Dad, Grampa, Great Grampa in Paradise. And until we meet again, Louis Salvante Crisostomo, may God hold you in the palm of His hand.

To send flowers to the family or plant a tree in memory of Louis Crisostomo, please visit Tribute Store
Friday
4
December

Share Your Memory of
Louis
Upload Your Memory View All Memories
Be the first to upload a memory!
Share A Memory
Send Flowers