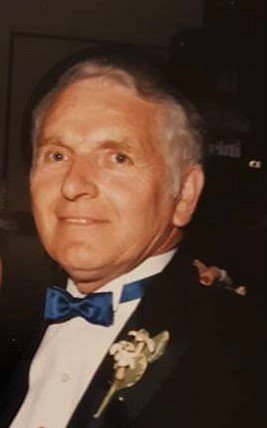 Born to earthly life on April 1, 1930, the second son of John and Lenore (Cripps) Megna, following brother, John and preceding brothers Richard and Patrick, and cherished sister, Ruth. On November 10, 2020, after a short illness, William rejoined his beloved wife of 60 years, Barbara Jean (Jahnke) Megna, in glorious everlasting life in Heaven as promised by our savior Jesus Christ. Bill passed peacefully at AngelsGrace Hospice after his family was able to communicate their deep love for him.

Bill and his Italian family grew up in Milwaukee’s Historic 3rd Ward. Bill enrolled in Juneau High School and became one of Juneau’s best athletes. Bill quarterbacked the football team, was an All City high-scoring forward on the basketball team, a 440 yard dash city record holder and a state-qualifying pole vaulter on the track team.

William met his wife when the fan bus at a Juneau basketball game broke down. The fans hopped on the team bus and 15 year old Barbara Jean Jahnke sat next to 17 year old Bill Megna; his heart was lost and a lifetime of devotion ignited. After five years of pursuit, Barbara saw the light and married Bill, on January 31, 1953. Bill continued his education at Milwaukee Teachers College, where he also played basketball, and graduated with a degree in Education.

After a two year stint in the Army (1953-1955), followed by an Honorary Discharge as a Military Police SP-4, he and Barbara returned to Milwaukee where he began his teaching career. They relocated with their growing family to Waukesha. Bill transitioned from a 6th grade teacher at Hadfield Elementary to being the Principal at Barstow, Heyer and Hawthorne Elementary Schools, finally retiring in 1987.

Bill’s hobby, and Barbara’s sometime bane, was purchasing and selling an endless stream of automobiles; a passion he developed while visiting his father’s filling station. The family had a fun time trying to name them all, probably falling a dozen or more short.

Bill was a quiet man with a smile causing, subtle sense of humor. He enjoyed teasing his children and broke his toe running from his son David after stealing his donut. His deeds spoke of this devotion and love for his family. The passing of a great man and our hero.

To send flowers to the family or plant a tree in memory of William Megna, please visit Tribute Store

Share Your Memory of
William
Upload Your Memory View All Memories
Be the first to upload a memory!
Share A Memory
Send Flowers