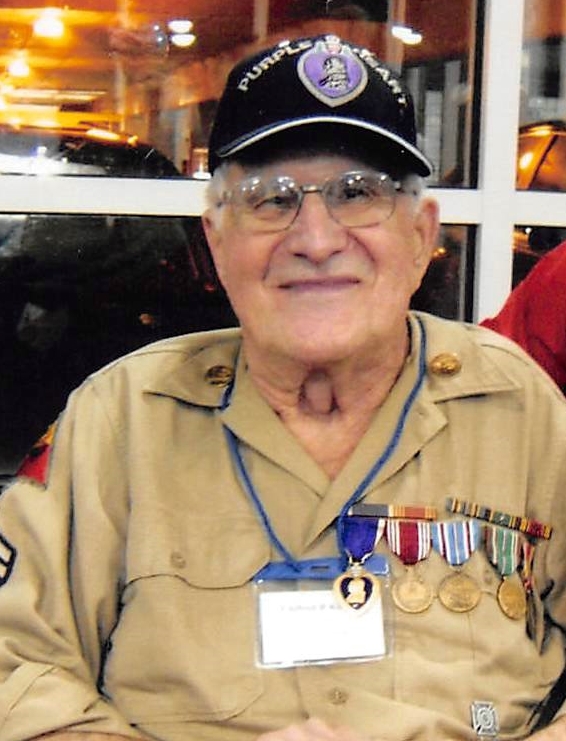 Alfred Robert Frederick Korth passed away peacefully Oct 22, 2019. He was born March 11, 1923 in Hankinson, ND. Son of Arthur and Elsie Korth. He grew up on a farm. He married Anna Pederson. He was a long haul trucker, until they moved to Milwaukee, where he worked at Babcock & Wilcox. They were lifelong members of First Lutheran Church of West Allis, WI. He enjoyed helping Anna with her quilting group at church. He even made quilts.

Alfred loved to work with wood. He'd build or remodel anything for anyone, from houses to fine furniture. His chest of drawers were a prized possession, built to last.  His kitchen cabinets were a thing of beauty.  When he built something, there was never a wasted, empty space, he'd make it into something useful. And everything had to fit perfectly.  Measure twice, cut once.

He and Anna loved to travel. They did all the US, Hawaii, Alaska, all Canada, most of Europe, Scandinavia, Egypt, Israel, and a bit of Mexico.

He enjoyed helping on the farm every summer, especially making hay and cutting silage with Jeff and Fritz.  Give him a lunch and cold coffee in a quart jar and he was ready to go.

He was the family historian.  He enjoyed doing the genealogy and has completed quite an extensive history.  He was proud of each new family member he found.

He grew pear trees when no one else did.  And they produced so much, that they canned a lot for friends and family.  Later on, when Anna needed help making bread, you'd find him elbow deep in dough, sleeves rolled up, apron and his cap on.

Alfred was a WWII veteran of the European Theater.  He was wounded in action and received a Purple Heart. He was proud to do his duty for his country. He always flew the flag and honored it.

Alfred was "Mr. Honor Flight". He was on the movie poster and DVD and had a bit part in the movie.  He attended many fundraisers to raise money for more honor flights--at theaters, golf courses, Harley Davidson, Steinhaufel's. He was so proud to help out. He so appreciated a "Thank You for Your Service".  His honor flight was something he thoroughly enjoyed. The airport welcome and Mail call was something he never forgot.

Alfred was a friend to all.  Nobody was a stranger for very long. He could talk to anyone. He was noted for his big hugs and warm smile, playful teasing and joking.  He was always willing to help anyone.  Ma and Pa opened their house to many and gave people a head start.  He was a kind and loving husband, dad, grandpa, GI-GI, uncle and brother.  He lived life to the fullest, in his own quiet way.  He was so proud of all his family. And we are so proud of him.  What a great life role model to follow!  Everyone should be so blessed.

A Visitation will be held on Monday October 28, 2019 from 5PM until 7PM at Cesarz, Charapata & Zinnecker Funeral Home, 237 N. Moreland Blvd. Waukesha, WI 53188. Additional Visitation on Tuesday October 29, 2019 from 10AM until the time of Funeral Service at 11AM at First Lutheran Church, 7400 W Lapham St, West Allis, WI 53214. Burial will take place at Southern Wisconsin Veterans Cemetery immediately following service. In honor of Al's memory memorials are appreciated to the Stars and Stripes Honor Flight, PO Box 867, Menomonee Falls, WI 53052.

To send flowers to the family or plant a tree in memory of Alfred Korth, please visit Tribute Store
Monday
28
October